Readers waiting for my latest novel can get a sneak peek at https://marilynmeredith.blogspot.com/2020/08/dead-horses-by-david-knop.html Good reading!

It has been a popular misconception that Native Americans’ sole victory was against George Custer and his 7th Cavalry, otherwise the tribes suffered an endless string of defeats. The truth is, although they ultimately lost their lands and way of life, Indians won significant battles along the way. In this and other entries to my … END_OF_DOCUMENT_TOKEN_TO_BE_REPLACED

Here is the latest review I have received for Animal Parts from the US Review of Books: Peter Romero, an officer with the Cochiti Pueblo Police Department, has been having a hard enough time as it is lately, what with a struggling marriage and local officials breathing down his neck. But his life is really … END_OF_DOCUMENT_TOKEN_TO_BE_REPLACED

World War Zero Between 1689 and 1763, there were no less than four colonial wars (often called World War Zero) involving France, Britain, Spain, and their respective colonies. These conflicts were expressions of European competition over balance of power, expansionism, mercantilism, and Native American alliances. In the summer of 1720, colonial New Mexico Governor Antonio … END_OF_DOCUMENT_TOKEN_TO_BE_REPLACED

Custer’s Last Stand. The Worst Disaster? A swirling mass of feathered, painted men and horses. The whistle of bullets and arrows. The coppery smell of blood and acrid odor of burned gun powder. The co-mingled screams of men and horses. The shrill wail of trumpets drowned by the ululating trill of warriors tasting victory. A … END_OF_DOCUMENT_TOKEN_TO_BE_REPLACED 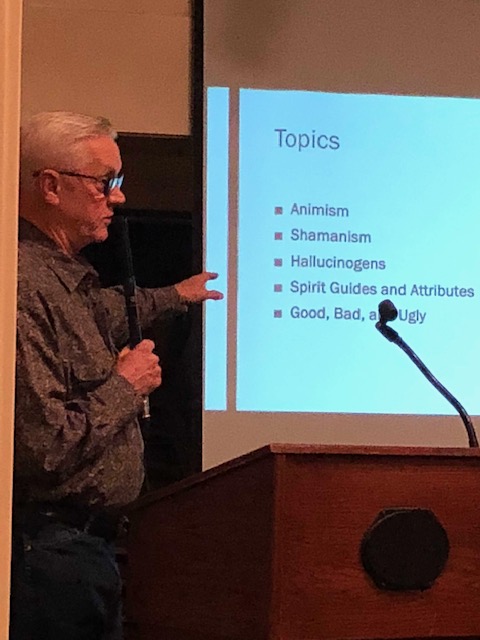 On October 11, I gave a lecture to the San Diego Mystery Society on Native American spirits and ghosts just in time for the Halloween season. I hoped they came away informed and spooked!

On Saturday, 13 October I will do a reading of Animal Parts for the Coronado Arts Commission Author's Showcase. Hope to see you there.

On Aug 25, at the San Diego Union Tribune Book Fair, Dave Knop found a new fan for his hit novel Animal Parts. What's next, the universe?

I sponsored the 18th tee and two military golfers at the recent Coronado (CA) Rotary Club Golf Tournament. Our club raised $80,000 for worthy charities, many of them veteran support charities. I have included some happy military golfers and my tee poster.

Greetings to All ~ This is a reminder that Animal Parts is now shelved in the San Diego Main Library, Popular Library section, and ready to circulate. Check it out!