For those who are familiar with my novels, you will undoubtedly recognize Cougar. All of the animals in my novels serve a purpose that is richer than mere additional conflict and dialogue. They are vital components to a capricious and delicate natural ecosystem, but all of them are guides, both spiritually and metaphysically, for my main character, Cochiti tribal policeman Peter Romero.

Guide animals in my novels are so named by their proper names e.g., Cougar, Coyote, Wolf, and Bear, etc., reflecting Native Americans’ reverence and each animal spirit’s personality. Historically, all have specific and far-ranging spiritual influence across tribes. Interestingly, dissimilar cultures imbue these animal guides with similar attributes (e.g., Coyote is always the trickster.)

Cougar is one of the most compelling characters of my Peter Romero series. Beautiful, sleek, mysterious, he is also a killer…passionate, unapologetic, and mesmerizing. For those who would like to know the lions of America, and learn more about Cougar himself, I’ll share some facts about mountain lions.

A dwindling species, few of us have had the privilege of seeing one (hopefully from far away) in the wild. They have many commonly-used names: “cougar”, “panther”, and “puma” among them. Regardless of the name they’re called, this majestic animal has been revered throughout the centuries by Native Americans. It is to our detriment that the reverence has faded as the animals now struggle to survive. They’re losing population but, just like his spirit, this is one tough cat.

Coat color varies from buff to reddish brown, to light silver and slate grey. The coat is short, coarse, uniform in color, and essentially unmarked. Cougar’s head is relatively small for a large cat, with dark brown to black patches on the muzzle, and beautiful irises of green gold to yellow brown. The ears are short and rounded, with forelegs shorter than hind legs, and footpads are large. The tail is long and slim. Cats found in Central and South America are smaller than those found in North America. 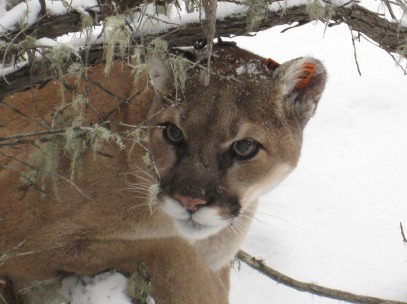 Cougar has the largest range of any terrestrial mammal in the western hemisphere. They roam from the Yukon in Canada to the southern tip of South America. Population densities have been estimated at no more than four adults per forty square miles in North America, and up to eight in South America. Radio telemetry studies in Chile found Cougar ranging up to forty square miles, with the cats often covering seven miles in just a few hours.

Survival Skills: You can’t outrun Cougar but you can outrun your buddy. 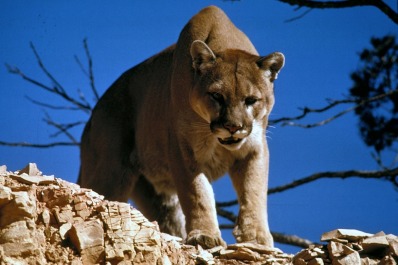 Adaptable and athletic, Cougar has great leaping, climbing, and swimming ability. Sight is his most acute sense, hearing is well developed, but his sense of smell, unlike dogs, is not particularly keen.

The bulk of Cougar’s traveling and hunting is done at night. The cat hunts over a wide area, carefully stalking prey and leaping on its back, or seizing after a short, swift dash. In North America, deer make up sixty to eighty percent of the diet. Cougar will eat whatever is most abundant in any given ecosystem, but seldom eats carcasses killed by other animals.

Cubs (or kittens) are adorable, spotted, fluff balls with dark brown spots over a brown buff coat. Spots fade away as they grow. Brilliant blue eyes change to greenish yellow or yellowish brown by sixteen months of age. These amazing cats can live to twenty years of age

Many cultures sought the big cats for spiritual inspiration. For example:

Conservation: Where are they? Can I help? 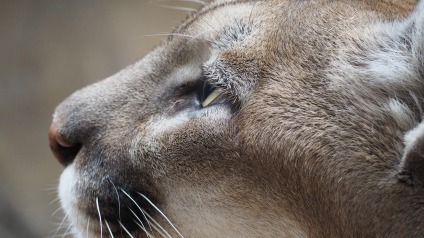 By the second half of the 20th century the mountain lion population was forced west of the Rockies. The only area where Cougar survived historical extermination and removal is a single population in the Everglades forests of southern Florida.

But all the news is not bad. Cougar is re-populating former Midwest habitats. Since the 1960s, the cats have become managed game species. In California, Cougar is a protected mammal. Populations are now growing and expanding their territories. Breeding programs established in the Dakota Black Hills and Badlands and western Nebraska have been successful. Sightings of Cougar in Oklahoma, Missouri, Arkansas, and Illinois are frequent. Today, the Mountain Lion Foundation counts Cougar’s population in the US as 30,000 animals.

The main threat to Cougar today is deadly highway traffic and rural development. Highway crossings and underpasses are required to prevent further losses. Outside North America, Cougar is shot on sight or subject to bounties. More prudent game management is needed. Despite wholesale loss of habitat and suppression of the cat’s numbers, Cougar is not considered endangered.

There are many programs we can join to help in the preservation of these magnificent animals. Click here to start: http://www.defenders.org/mountain-lion/what-you-can-do

To read about the powers of Peter Romero’s own spirit guide, Cougar, read Animal Parts by David E Knop. Found on Amazon and everywhere eBooks are sold.