Most of us have heard of the political slogan “Tippecanoe and Tyler too”, but where did it come from and what does it mean? The saying was used throughout the presidential campaign of William Henry Harrison and John Tyler during the election of 1840. Harrison won largely on his victory over the Shawnee at the Battle of Tippecanoe, but the battle spawned a curse lasting more than 120 years. 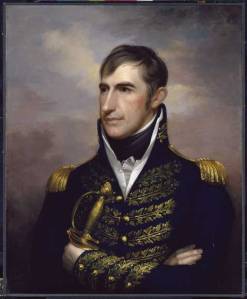 “Old Tippecanoe.” Governor of the Indiana Territory, a principal contributor in the War of 1812, and the ninth President of the United States. Harrison (left) was the son of founding father Benjamin Harrison and in turn was the grandfather of Benjamin Harrison, the 23rd president. He was a survivor of the 1791 massacre by Little Turtle and his Miami braves at St. Clair’s Defeat. 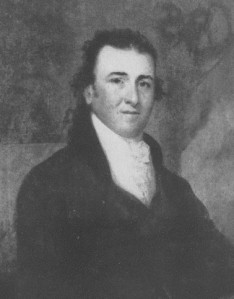 Aide-de-Camp to General Harrison. A veteran Indian fighter, Colonel Owen (right) was wounded during St Clair’s Defeat and participated in many battles during a twenty-year military career. He was a Kentucky legislator and served in the state’s constitutional convention. His death at the Battle of Tippecanoe changed history. 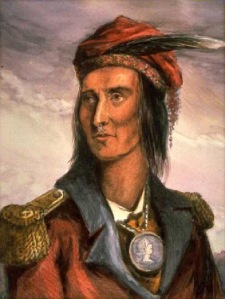 Shawnee warrior, chief and primary leader of a large Native American confederacy in the early years of the nineteenth century. Born in present-day Ohio. Growing up during the American Revolution and the Northwest Indian War, Tecumseh (shown left) envisioned the establishment of an independent Indian nation east of the Mississippi River under British protection. 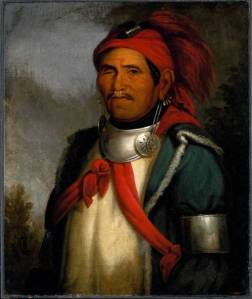 Commonly known as The Prophet and spiritual leader of the Shawnee. Brother of Tecumseh. In 1808 Tenskwatawa (right) and Tecumseh established a village Americans called Prophetstown north of present-day Lafayette, Indiana. There, the brothers’ pan-Indian resistance movement included thousands of followers, with The Prophet providing the spiritual foundation. Together, they mobilized local Native Americans to fight the invading Americans and remained resolute in their rejection of alien authority and acculturation.

In November 1811, as tensions and violence increased in Indiana Territory, Governor (and General) Harrison marched an army of about 1,000 men to disperse Native Americans gathered at Prophetstown.

Tecumseh was away recruiting allies. When Harrison arrived with his army, he asked for a meeting. The Prophet, suspecting the general’s true intentions, attacked November 7 at 4:00 a.m. The outnumbered attackers penetrated Harrison’s lines, but his soldiers stood their ground for more than two hours until the braves retreated, low on ammunition.

After the battle, the Indians abandoned Prophetstown. Harrison burned it to the ground, destroying the food supplies stored for the winter. Having accomplished his goal, Harrison proclaimed a decisive victory.

Public opinion blamed the violence on British interference in local affairs. As a result, the battle helped sway the country toward war in 1812. For the natives, the battle was the end of their dreams of a confederacy against white encroachment, and forced them to join forces with the British as the only defense to their way of life. 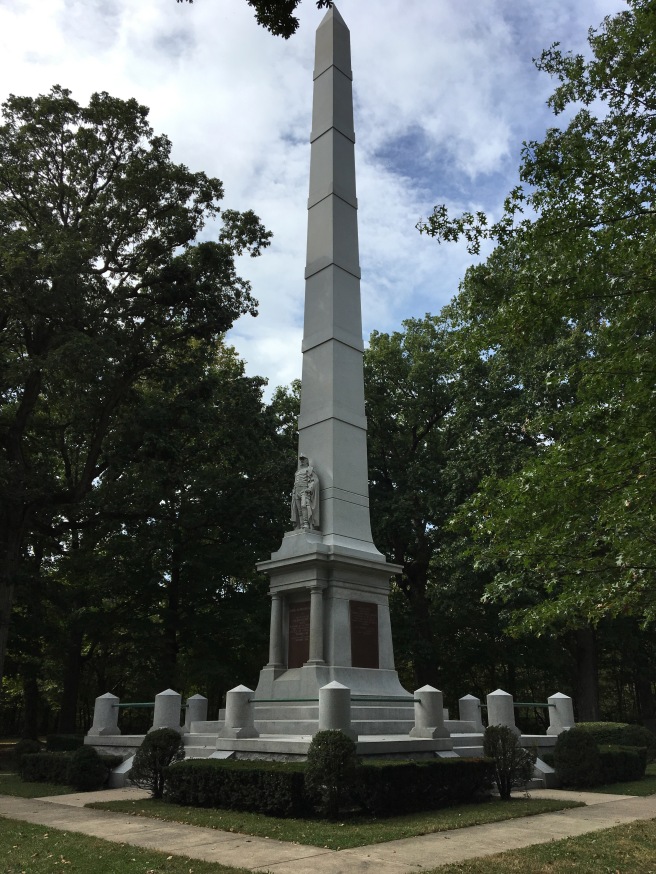 Tippecanoe’s battlefield monument, as it stands today, is shown above.

Col. Abram Owen is my fourth great uncle on my mother’s side. The Owen family has produced U.S. military members (including this author) since before the American Revolution. 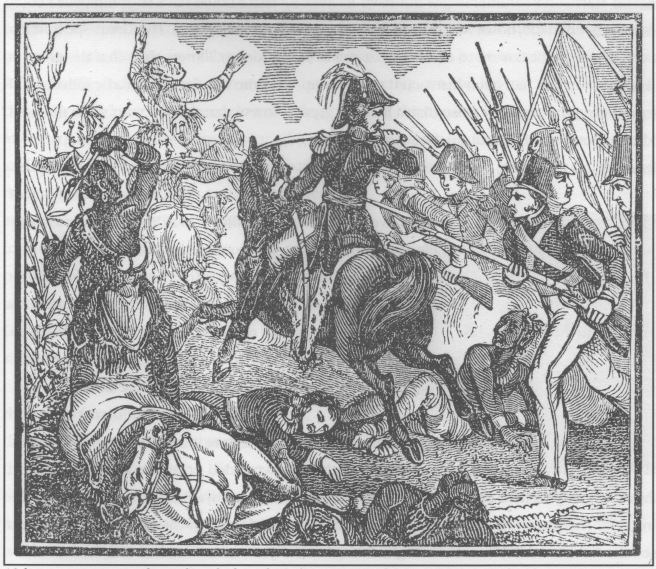 Colonel Owen, a veteran of frontier struggles, died in the first few moments of the Tippecanoe Battle in a tragic mix up. The Prophet had informed his sharpshooters that General Harrison rode a white horse and directed all their efforts toward killing him. However, in the heat of battle, Harrison grabbed a dark-colored horse and Colonel Owen mounted a white one. The illustration above depicts that fateful moment. In it, Colonel Owen lies dead on the ground (Source: Indiana Public Library).

Owen’s unintentional sacrifice saved the life of a future president. In praise of Owen, General Harrison said, “… let me not forget the gallant dead. Col. Abram Owen, Commandant of the Eighteenth Kentucky Regiment, who joined me a few days before the action…accepted the appointment of volunteer aide-de-camp to me. He fell early in the action.” Harrison added, “The representatives of his state will inform you that she possessed not a better citizen, nor a braver man.”

Where are they now?

Harrison lived to become the oldest president ever elected at the time. However, he died of pneumonia a month after taking office. Tyler then assumed the presidency, setting a major precedent and ultimately the adoption of the 25th Amendment to the Constitution. Harrison is buried in North Bend, Miami Township, Ohio. 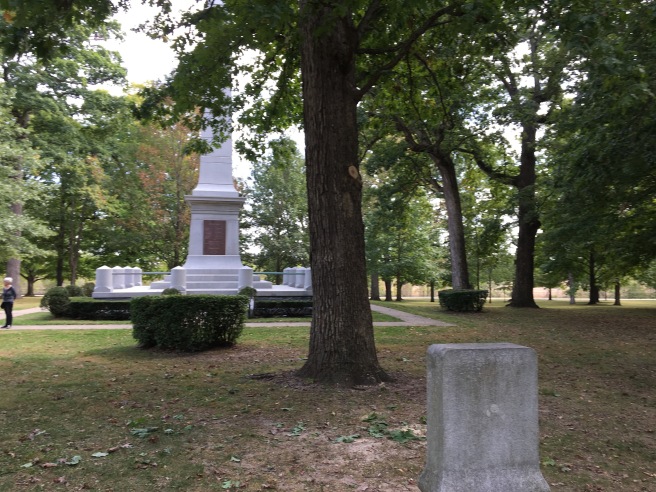 Colonel Owen is buried where he died. His tombstone is visible in the lower right corner of the photo above. His name is also engraved on a plaque visible on the white monument to the left of the tree. Park rangers believe some of the park’s trees were living at his death in 1811. Two counties, one in Indiana and one in Kentucky, are named after Owen.

As a result of the battle, Tecumseh’s confederacy never fully recovered. This led to a further deterioration of relations between America and Britain and was a catalyst of the War of 1812, which began six months later. Tecumseh was killed by Americans in 1813 during the Battle of the Thames near present-day Chatham, Ontario. It is believed the chief’s mutilated remains were left on the battlefield.

Today, the U.S. Naval Academy has a Tecumseh Court which features a bust of Tamanend, an Indian chief who was known as a lover of peace and friendship. However, midshipmen prefer the warrior Tecumseh and refer to the statue by that name.

Legend says that Tecumseh was so incensed at his brother’s ill-fated rush to battle, he swung The Prophet by the hair. The Prophet became an outcast, and moved to Canada during the War of 1812. He remained in exile until returning to the United States in 1824 to assist with the Shawnee removal to Kansas. He faded into obscurity and died in what is now known as Kansas City in 1836. His influence lives on in the form of a deadly curse.

The Curse of Tippecanoe

In revenge, The Prophet reportedly cursed all U.S. presidents elected during years with the same end number, zero, as Harrison.

The curse, first widely noted in 1931 by Ripley’s Believe it or Not! says that ever since Harrison became president (1840), every person elected to the office in 20-year intervals has died while serving as president. Harrison succumbed to pneumonia after just one month in office. Abraham Lincoln (1860) was assassinated, as were James A. Garfield (1880) and William McKinley (1900). Both Warren G. Harding (1920) and Franklin D. Roosevelt (1940) died of natural causes in office, while John F. Kennedy (1960) was assassinated. Ronald Reagan (1980) was the target of an assassin’s bullet, but survived.

Does the Prophet’s curse still hold? To paraphrase Yogi Berra, tough times ain’t over ‘til they’re over.

The Mystery of the American Southwest

“As an Amazon Associate I earn from qualifying purchases.”